Law enforcement officials recently foiled what appears to be an assassination attempt that targeted President Donald Trump via a package containing the poison ricin, according to a report.

Citing two law enforcement officials, CNN reported the package was addressed to Trump and intercepted by authorities this week.

Two tests were done to confirm the presence of ricin,” according to the outlet.

The New York Times confirmed, citing a law enforcement official, that an envelope addressed to the White House and containing Ricin was intercepted this week.

“It is unclear when the envelope was intercepted before it reached the White House mail room, but investigators believe that it was sent from Canada, according to the official,” The Times reported.

“Federal investigators are working to track down who sent it and determine whether other envelopes have been sent through the postal system.”

The FBI’s field office in Washington, D.C., told the Washington Examiner it was investigating a “suspicious letter,” though it did not provide many details.

“The FBI and our U.S. Secret Service and U.S. Postal Inspection Service partners are investigating a suspicious letter received at a U.S. government mail facility,” the FBI’s statement read.

“At this time, there is no known threat to public safety.”

FBI STATEMENT: “The FBI and our U.S. Secret Service and U.S. Postal Inspection Service partners are investigating a suspicious letter received at a U.S. government mail facility. At this time, there is no known threat to public safety.” 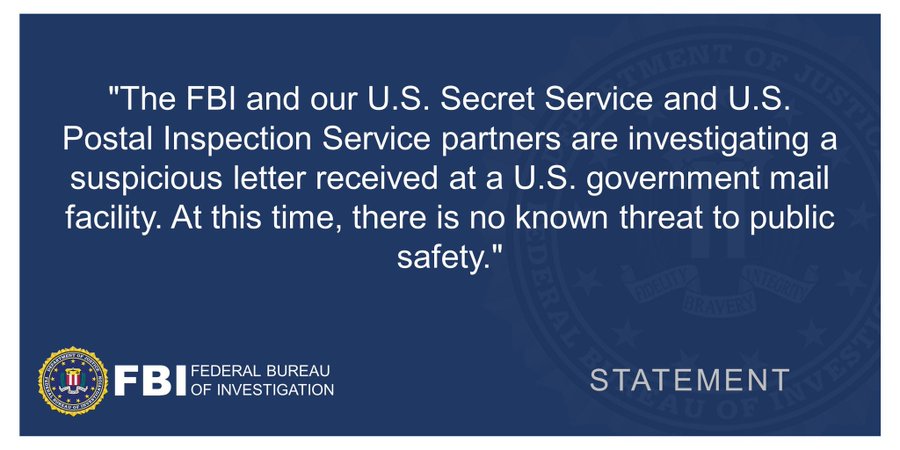 According to the Centers for Disease Control and Prevention, it takes a “deliberate act” to try and poison someone with ricin.

“It would take a deliberate act to make ricin and use it to poison people,” the CDC says.

“Unintentional exposure to ricin is highly unlikely, except through the ingestion of castor beans.”

There is no antidote for the poison.

“Because no antidote exists for ricin, the most important factor is avoiding ricin exposure in the first place,” the CDC says.

“If exposure cannot be avoided, the most important factor is then getting the ricin off or out of the body as quickly as possible